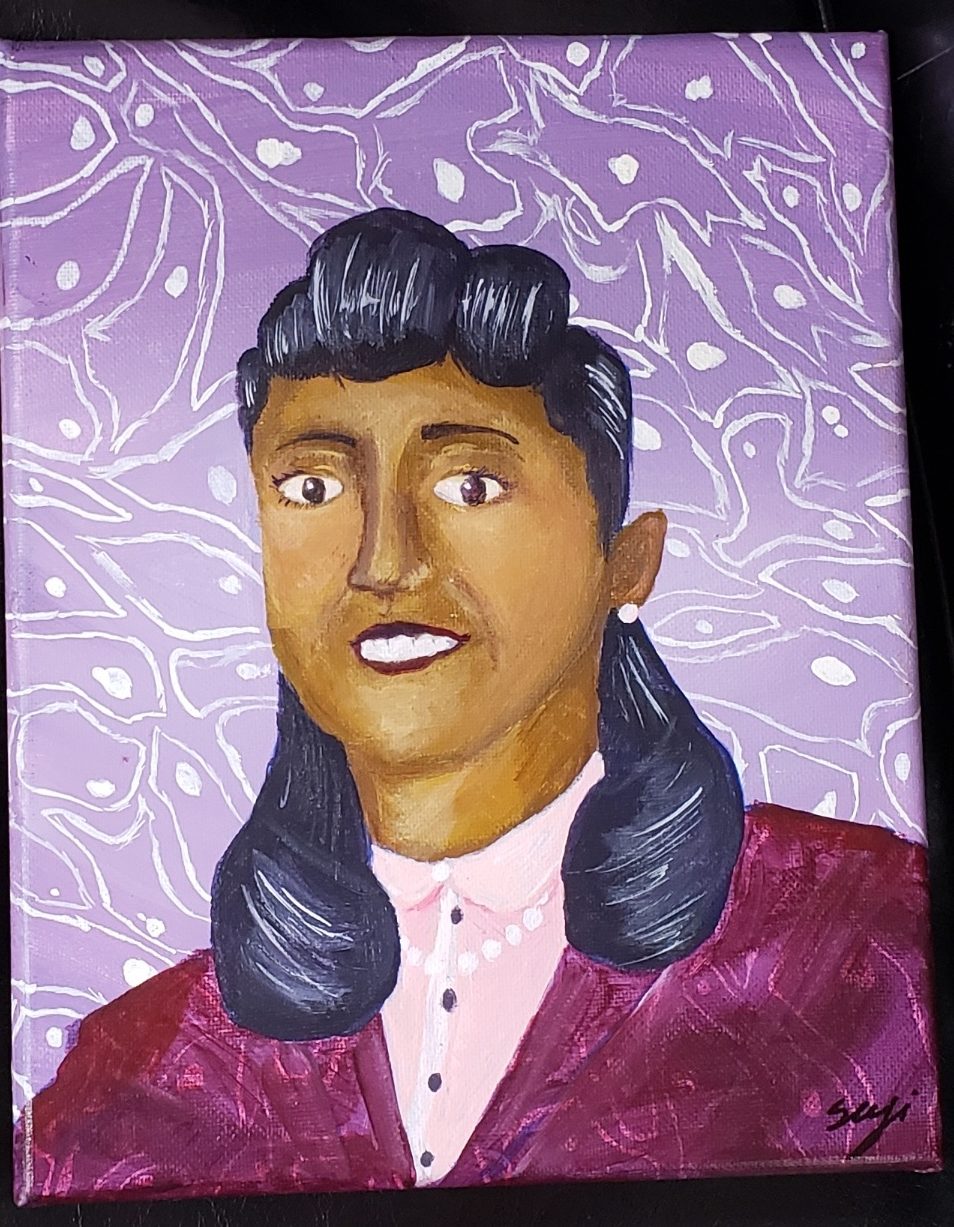 Some stories last and last and grow, and Henrietta Lack’s life and contributions to science is one of them.

Yet for many years, despite her significance to health researchers, her story was ignored or untold or masked. Lack, a mother who grew up on a Virginia tobacco farm, suffered cervical cancer. She sought treatment at Johns Hopkins Medical Center and in 1951, a researcher took two tissue samples from her cervix, one cancerous and one healthy, without her consent or knowledge. Known as the HeLa cells, they became invaluable to understand and solve many diseases, yet Henrietta Lack for decades received no recognition.

Lack’s is one of 15 portraits in Mint’s Heroes: Now & Then show, on display at the Grand Rapids Art Museum through May 22. The exhibit, the first traveling exhibit organized by Mint, debuted in September at the Scarab Club in Detroit. We knew the show, like Lack’s story, needed to be seen.  So ot moved to the Birmingham Bloomfield Art Center in late fall, and opened at Grand Rapids Art Museum Feb. 20.  Read more of about Heroes: Now & Then back story in this wonderful Model D feature article

Despite aggressive treatment for cancer, Henrietta Lack’s died eight months after she was first seen at Johns Hopkins Hospital at age 31. It was 1951 and no one had told Lacks or her family that her cells were harvested during her treatment and would become the backbone of medical treatments for decades to come.  Lacks children suffered after their mother died; one daughter developed childhood epilepsy and died unvisited in a state hospital.

Her impact continues today as thousands of scientists use her HeLa cells – the first immortal or ever growing cells –  to investigate drugs and seek cures for many diseases. Among the successful discoveries based on her HeLa cells are cures or treatment or for polio, hemophilia, Parkinson’s and to develop gene mapping, understand the effect of cells in space, infectivity of HIV and fight several kinds of cancer. More than 110,000 publications from 1953 to 2018 cited her HeLa cells and scientists received at least three Nobel Prizes based on their research using her cells, the National Institutes of Health reported.

“For researchers, HeLa cells were experimental workhorses, wonderfully easy to grow and transport. But for the Lacks family, those cells were the essence of their lost mother, whom scientists had infected with viruses, shot into space, crossed with mice, and generally condemned to everlasting torment,” wrote The Lancet, a medical publication.

At first, scientists used a pseudonym – Helen Lane – on the cells. It took 20 years for Henrietta Lack’s name to come forward and almost 30 more years for her story to be well told by journalist Rebecca Skloot. This reminds us a bit of how some Black artists and painters were treated by many museums and galleries for too long.

Mint’s portrait of Henrietta Lacks shows how art and science dance beautifully together, what some call STEAM.  Oluwaseyi Akintoroye chose Lacks as her hero and carefully researched her HeLa cell structure before she painted in the portrait’s background.  (Her beautiful painting of lavender flowers recently was turned into  a Mint greeting card  and Mint is considering a Heroes series of postcards.)

If you wish to learn more about Henrietta Lack’s life and impact, check out the best-selling book The Immortal Life of Henrietta Lacks by Rebecca Skloot. Read an excerpt from Skloot’s book here.  (The author helped launch the Henrietta Lacks Foundation, which provides support for others who have contributed to scientific research with no benefit or knowledge.) Or watch the documentary based on that book, which stars Oprah Winfrey and is available on HBO Max or for rent on Amazon Prime.

If you wish to support Mint’s arts, science, youth development and creative summer jobs program, be a Hero and please donate a few dollars today.